What does a ball hitting the bat look like? 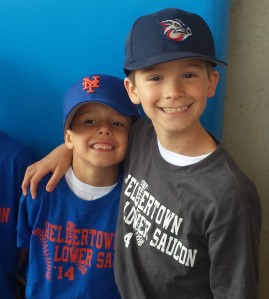 His uniform seemed like a lead shroud hanging from his thin frame. His hat pulled low, concealing wet eyes. Glove tucked under his arm as he drags himself into the car. He is heartbroken.

My heart breaks for him, also. I’ve been there and it feels like there is nothing worse, not at that age.

Not even a single saving ping of a foul ball, and my poor son seemed broken.

Baseball sucks. He hates it (and he hasn’t even realized yet that I’ve doomed him to be a Mets fan).

This isn’t the “good” heartbreak that baseball dooms all her fans to.

We talk, we analyze, we get ice cream. He laughs and smiles again and plays video games with his brother.

My heart continues to twist, impaled on that metal bat he dropped in frustration. I want to let him quit…There are still ten more games.

A few days pass, we talk more. With each day, he wants to talk less about it. I feel helpless to help him. Rain pours and prevents me from trying to help him. It seems like he doesn’t want to even try anymore.

I know he hears them and they fight with his own, once confident voice.

His brother takes a turn and he hits half the balls.

We step away from the plate. We have a catch and I let him talk about his video game. I’m dying inside.

I ask if he wants to bat again. He reluctantly says “yes”.

I get a box to help him visualize his strike zone. I get a second bat and have him hit the head of it with his bat. I move it around so he can adjust his swing. He has fun with that.

I take the bucket of balls and back up 15 feet. He misses the first six.

Then I remember his analytic mind. I ask him what he thinks a ball looks like when the bat hits it. He says he doesn’t know. I tell him that we should find out.

He hits the next one 50 feet to the driveway.

The next ball hits my car.

The next ball almosts hits me.

I back up another 20 feet. He looks nervous again. I go back to five feet in front of him and throw a ball over the plate. He realizes the longer pitched ball is his advantage. I go back to the full distance.

The next ball goes back into the driveway.

He hits half of the next two dozen and he is beaming. We call it quits for the night.

Next game. First at-bat. He fouls off a pitch before striking out, but clearly his swing is better.

His brother sits next to me, eyes closed, too nervous to watch his older brother.

He hits a slow roller up the third base line.

It might as well have been a world series winning home run.

Hard fly ball to left field. Outfielder doesn’t get there.

Ben is almost dancing on first base.

Back in the car. I pull my hat low, concealing wet eyes.