A Day with Hank


Years ago, when we lived in a much smaller house, my collection of baseball memorabilia was relegated to a handful of boxes. Two houses, two kids and four dogs later, I had lost track of where exactly all of the boxes had gone. Between our attic and our basement and through 20+ years of “stuff”, I spent parts of my day trying to remember where one particular box was. After digging out a couple in the basement and coming up empty, my already melancholy mood multiplied. 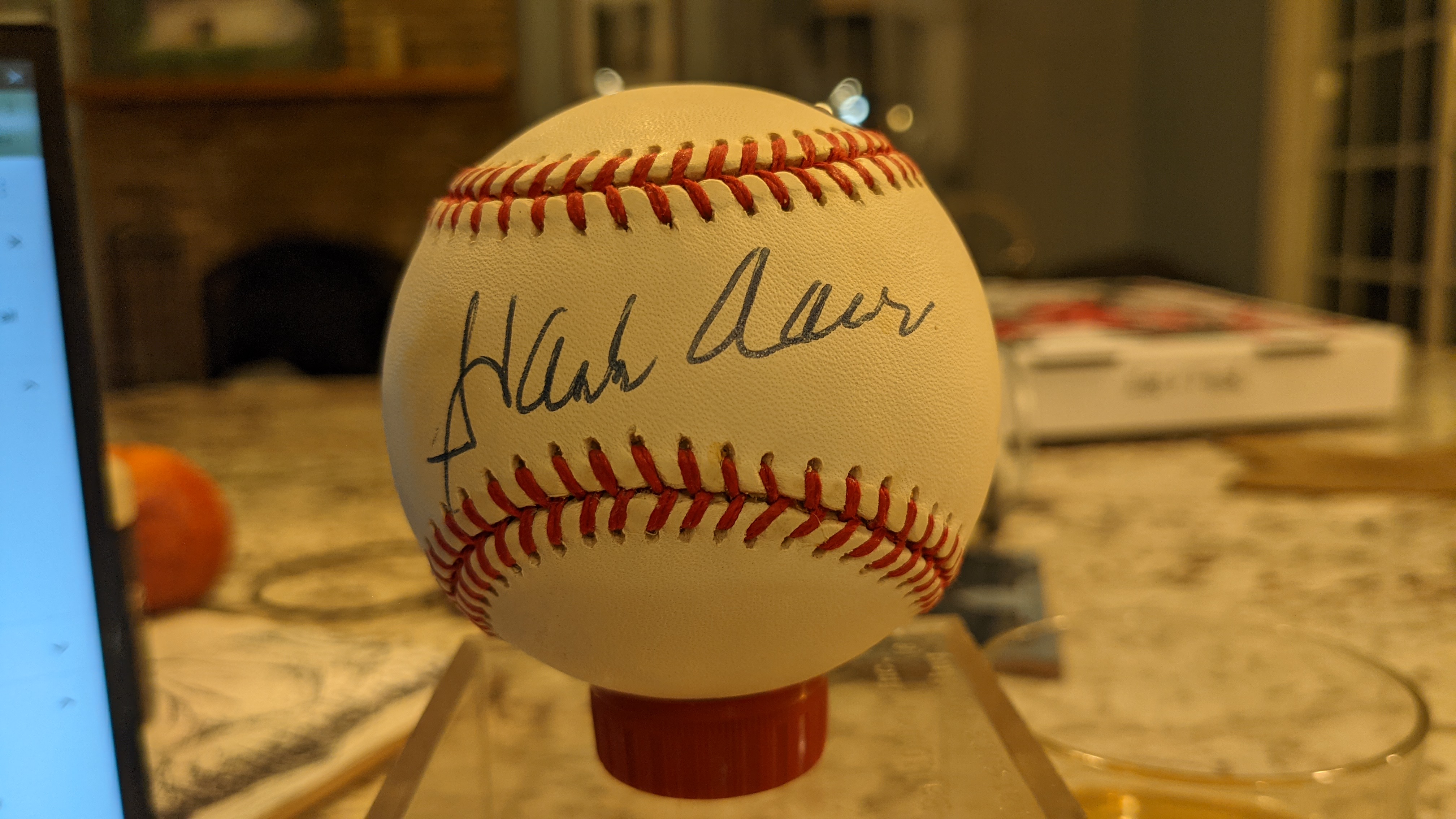 After Andrea went to bed and the boys disappeared to their rooms, I finally remembered where the one box was and I grabbed a flashlight and headed up to the attic. A few minutes later, I climbed down the attic ladder, triumphant with prize in hand. As I was about to head downstairs, I heard Ben in his room, so I thought I would show him what I found. I held it out for him to see and he asked what it was.

“A Hank Aaron autographed baseball,” I told him.

Much to my surprise, he sat up in bed and his eyes grew wide. Despite my best efforts to not directly force my interests on them, my passion for sports never took with the boys. I sometimes wonder if in an effort to not appear like I was shoving my interests down on them, I never really pushed it with them enough to even let the seeds of it grow. Sure, I had them play Little League and I bought them hats and shirts with my favorite teams and, every so often, tried to get them to sit and watch a football game with me, it just was not what interested them.

So, when Ben reacted the way he did when I showed him a Hank Aaron autograph, it was not what I expected and instantly improved my mood. Excitedly, he went on to ask me how I got the baseball.

I told him how, back when I worked as a public relations intern for the Baltimore Orioles, a magazine had asked to do a photo shoot of Mr. Aaron for an article. At the time (and arguably, still is) Camden Yards was the crown jewel of baseball stadiums and the photography team wanted to have it as the backdrop for the pictures. The morning of the shoot my boss John called me into his office and nonchalantly told me that I needed to spend the day with the photography team, making sure they didn’t go where they shouldn’t and to help them out where I could. And, oh yeah, they would have Hank Aaron with them and I should make sure he was taken care of as well.

John was known to be a practical joker and I thought for sure he was pulling my leg on this. However, his practical jokes were never cruel and a few hours later, I found myself escorting Mr. Aaron and a small entourage around the stadium.

Honestly, being in the presence of one of the all-time greats in the sport I loved and worked in was just too great of an honor and too much for my introverted, socially awkward mind to handle that I am pretty sure it short circuited rather quickly that day. As much as I would have liked to share the stories he shared with me that day, my hero worship, I-don’t-belong-here-we-need-to-get-out-of-here brain seems to have misfiled them away with what I had for breakfast that day. As much as I would like to tell Ben that I made him laugh and that he told me that he enjoyed spending that day with me, it would be a lie (although he was gracious enough that I would not have been surprised if he lied and told me just that). I was left in such awe in the honor of meeting this man, that I cannot remember more than a few moments of that day.

Ben then asked me what he was like. And that, I remember. He was soft spoken and gentle in the way he talked. He came off to me as being kind and warm, but still guarded among the strangers that surrounded him. He seemed to enjoy sharing his stories and did not seem to mind that he had to spend his day with this kid and group of photographers. And while he carried a sense of pride with him, he could have just as easily been a kid in that stands that caught Hank Aaron’s 127th home run ball and not actually be Hank Aaron, the owner of the Major League record for most home runs in a career in the way he presented himself.

The thing that stuck with me was that at the end of the day, I didn’t feel like that bumbling, brain fried, wide eyed fool of a kid that I must have come off as. I, instead, felt comfortable with him and not at all embarrassed about how I may have come off to him. My mind likes to take all my most awkward moments where I become a fool and say stupid things and play them on a constantly loop. However, at the end of that day, I felt at ease with who I was and my insignificant role in this great ballplayers life. My point being is that Hank Aaron was the type of man that seemed to make others around him feel comfortable and even important. When he could have just as easily made me feel small, I felt like I belonged in those moments with him and that he enjoyed my company, whether it was true or not.

When it was time to say goodbye, my other manager Bill and I walked this great ballplayer to his car. Bill handed Mr. Aaron a handful of baseballs and asked for some autographs. As an intern, asking for autographs was a carnal sin, so I felt like I was wishing for a World Series title in hoping Bill would give me one of the balls. Sure enough, after collecting them from Mr. Aaron, Bill turned around and handed me one of them and made a comment about wishing he had National League baseballs instead of American League baseballs for him to sign.

As I recalled all of this and shared some of it with Ben, I paused and looked at the baseball for a moment and fought back tears as I told him that Hand Aaron had passed away earlier today. Ben, at a loss for words and after a respectful pause said, “Wow, you really do have some cool stories,” and then changed the subject and asked me what other treasures I had hiding in the attic. It was such a brief moment in time with Ben, but it felt so natural to share that deeply emotional memory (the type of memory and sentiment I am usually embarrassed to share) with him and I think it will forever burn its way into my memory.

When I look way back to my days in baseball, there are so many images burned into my brain. However, one of the first ones that always comes to mind is of Hank Aaron lit up by a perfect summer day with a field of green behind him and a giant smile on his face. While I never saw the pictures from that day’s photo shoot, that image lives in my mind. And now, over 20 years later, Hank Aaron managed to reach through time to give me another wonderful moment to treasure for the rest of my life, but this time, with my 15 year old son.