As some of you may know, I am the President of our local youth basketball program. It consists of about 230 kids across 25 teams and is something I enjoy doing. Right now we are in our registration period for the upcoming Winter season, so I had written something to post in the local online “newspaper”. As I wrote it, I got a bit wrapped up in my personal experiences around basketball and was forced to edit it down to make it appropriate for it’s purpose. So, I thought I’d share the rest of the story here.

When my family and I moved into our school district our sons were in kindergarten and preschool. Almost immediately, we signed them up for tee ball and soccer. Baseball was always my first love and soccer seemed like the sport you were just supposed to put your kids in, if they were going to play anything. We loved those experiences and we still do.

While baseball was my first love, I was never very good at it. I couldn’t hit a fastball to save my life. Regardless, I still played it and loved it. However, it was basketball that became my second love. It was a sport I picked up quickly and was something I was good at.

I grew up with issues with my arm that kept me from participating in sports until around 8th grade. At that point, I had grown use to watching TV, playing with my Transformers and exploring the woods behind my house. My parents wanted me to do more sports, however, and bought a basketball hoop to put out in front of the house. Initially, they had to force me to go out and play and I reluctantly did.

The first time I thought I might be somewhat good at it was on a Friday night at my church’s youth group. It was a place where teens could hang out on a Friday night and I started playing more basketball there. I remember one specific moment during the first game I played there…I was driving to the basket and got knocked awkwardly by a defender and still made the shot as I was falling away from the net. I remember what I was wearing. I remember the exact spot on the court. I even remember the awkward angle of my arms. If in the hours after that, it was the only shot I made, I may have forgotten it. Instead, I fell in love with the game.

We played on birthdays, holidays, weekends throughout the summer and really, whenever we had the chance. One of my favorite pictures, and one that got repeated years later, was of my family and I standing out in front of the basket on a cool fall day. I am pretty sure it was taken shorty after one of the many times that I beat my older brothers in basketball.

I tried out for the high school team my senior year. It was something I had prepared for what seemed like forever. I practiced hard before hand and I really thought I was ready. However, I was devastated when I got cut after just the second day of a five day tryout. Ultimately, that team would go on and have the most successful season in the history of my high school, so time and logic eventually healed that wound. That, and still being able to beat my older brothers in basketball on a fairly regular basis.

Basketball became how I spent time after school, on weekends and whenever I got a chance. It gave me confidence and an helped fuel my passion for sports.

In college, it was how I caught up with my high school friends during the summer. We would meet at the local park, which had lights and we would play until the cops came by and reminded us the park was closed.

Some of my best memories of growing up occurred on the basketball court. 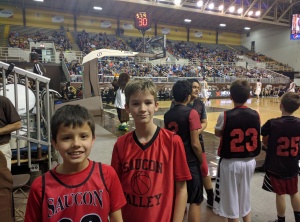 It wasn’t until Benjamin was in second grade that I saw that our district had a youth program for basketball. I wondered how I had missed that the year before. I signed both of them up almost immediately, hoping they would get as much love and enjoyment out of it as I did. I also volunteered to coach, wanting to be a part of their introduction to this game. And while I believe that was accomplished, the basketball program became so much more.

For me, the program is something very special. Yeah, these days I am pretty biased towards the program, but in that first year, we absolutely fell in love with it. At that age, the kids played in the Elementary School cafeteria on 8-½ foot baskets with coaches – moms and dads – reffing the games (and by reffing, I mean doing their best to get some semblance of a game out of first and second grader chaos.) As the season went on, watching these kids go from barely being able to dribble a ball to actually making baskets was really just amazing. And when we were in that cafeteria, with parent so close, cheering on their little sons and daughters, you couldn’t help but feel a part of a community centered around this game.

That feeling has grown through the years.

Watching some of these kids that I coached and coached against back when they could barely get the ball to the basket, become stars on the court in such a short amount of time is amazing and fun to watch. And to have those short polite exchanges of “hello’s” and “Little Jimmy played great today” between parents develop into full friendships between them simply deepens that feeling of community.

Coaching Ben and Matt through the years has also been a wonderful experience. To see them grow on the court and have their own moments to succeed and be heroes has been special. One day, I am going to write more about their experiences in the league and one particular Saturday where each of their teams were going for the respective league championships, but that will come at another time.

However, I have come to love the time playing Ben and Matt out in our driveway. We don’t get out there too often, but when we do, it becomes a highlight of my day or even week. When they were smaller, they use to draw chalk lines and circles on the court to mark areas that I could shoot from (basically, I wasn’t allowed layups) and they would be so cute trying to play me and call their own plays between themselves.

These days, however, the two of them beat me more often than not. I do hold back on layups still, but they know how to defend against me and they have learned to work together to score shots against me. And the smiles on their faces when they do beat me is a real joy.

I really love basketball. The love of playing it has turned into a love of coaching it. My mind is constantly on it during both the Winter and Summer months. I often find myself wondering if I could still beat my older brothers like I use to (frequently) when we were kids.

It’s a love I hope my sons find and I hope the grow up with it as a consistent part of their lives.

One thought on “Growing Up With Basketball”