Heat and humidity rage on. Kids still sitting around all day, bored to tears with school still weeks away. Summer vacations still going strong. All that must mean that, YES, it is finally Pumpkin Spice Season! And when it comes to pumpkin spice _________ (fill in the blank), especially pumpkin spice Lattes, I am helpless…completely and utterly helpless to walk away from anything that has that weird orange glow to it. Like an Ugg wearing, Bieber loving thirteen year old girl, I simply cannot resist pumpkin spice. It is my vice and I LOVE it! 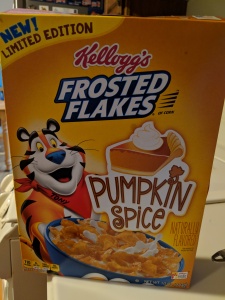 However, that said, there are a lot of crappy pumpkin spice flavored foods out there. Some, I think, simply use an orange-colored liquid that previously had a rotten pumpkin floating in it and claim it as pumpkin flavored. Some, I think, just have a few shakes of nutmeg added to it with no thought of actual pumpkin. While others have that deep flavor of pumpkin with just the right combination of nutmeg, cloves, cinnamon and ginger that invoke that wonderfully content feeling of being a bloated gourd sitting at the dinner table late on Thanksgiving night trying to force down that one savory piece of pie!

For years now I have been contemplating writing about my unhealthy autumn addiction and reviewing some of the pumpkin spice flavored offerings that are being thrown out there. So, welcome to the first edition of Pumpkin Vice.

Now, I have no culinary credentials behind me to add credibility to my reviews, but I do carry a pretty sizable gut in front of me that proves I know what I am talking about when it comes to food. I have also baked enough pumpkin pies through the years to know how the flavors go together to make something as outstanding as a good pumpkin spiced food.

The qualities I am looking for in a pumpkin spice flavored creation is something that gets me as close as possible to that authentic pumpkin flavor. I have two standards that I will be hold them against. The first is my own homemade pumpkin pie, which I just love and dream about (it’s not THAT weird, is it?). And the second is my mom’s homemade pumpkin bread…That stuff is heaven with just a little bit of powdered sugar dusted on it. Ugh…so good. (Mom, send pumpkin bread, A-SAP.) What these have in common is the true pumpkin flavor with just the right amount of spices added in.

Even when you are comparing pumpkin pie to pumpkin bread, you are looking for different combinations of spices and pumpkin. The textures are so different that different blends are needed. So, when I sample different pumpkin themed foods, I am looking for the right blend to go with the right food.

My personal holy grail of pumpkin spice flavored concoctions is a good ice cream. A really good one has eluded me for years. A few years ago, Ben and Jerry’s had a really nice pumpkin cheesecake ice cream that was pretty close, but I have yet to discover a perfect pumpkin ice cream. The closest I ever came was taking a couple of Pumpkin Spice Eggo waffles and putting some Breyers vanilla ice cream between them, and that was…well…I may or may not have sobbed tears of joy.

Dunkin’ Donuts has the best pumpkin spice donuts and muffins, but they could still be better. I may do one of these just on donuts and/or muffins alone. It has been a while since I have sampled anything other than Dunkin’ Donuts, so it might be time to give them a look.

I just alluded to it, but Pumpkin Spice Eggo waffles was the king of this annual food gimmick. They were the perfect combination of pumpkin and spice. In fact, I wouldn’t be surprised if there was a little bit of crack sprinkled in it. However, Eggo broke my heart when they stopped making them a year or two ago (or they stopped distributing them around here)…They were the pinnacle of pumpkin spice flavor, even better than the Starbucks latte that I think started all this.

So, let’s get started. It was August 7th when Benjamin and I were walking through the local Giant and discovered Kellogg’s Pumpkin Spice Frosted Flakes sitting proudly on an end cap. First of all, I do not condone them pushing fall stuff in early August. Second, how the hell are they going to pull off the flavors in a flake? However, as I mentioned before, I am powerless against the pumpkin, regardless of how early in the summer it comes out…a fact that I am sure these companies know with certainty. Plus, Frosted Flakes are one of my favorite cereals, so they were worth a try.

Kellogg resisted the urge to make these flakes an orange tinge, so when you look at them, they look like a normal Frosted Flake. That was a good start. Nothing crazy there. As for smell, when you open the bag, they smelled like a Michael’s craft store in the fall. They are exactly what you expect store-bought autumn to smell like. A blend of cloves, nutmeg and cinnamon that I am sure we have all associated with the fall. There was concern, especially in a flake form like this, that I had just bought a box of potpourri.

And they do taste very much like they smell, but in a good way. None of the spices overwhelm the flavor and it gives them a nice touch. They have a pleasant sweetness to them that stays true to normal Frosted Flakes and doesn’t overwhelm with sugar.

I did secretly hope that these little bits of pumpkin spice floating in milk might give a sense of pumpkin pie covered in whipped cream, but that was too much to hope for. I may, however, have to try them on top of a scoop of vanilla ice cream. And, as I think about it, there are variations of fried ice cream that use Corn Flakes as the insulating coating…It gives me an idea and I may have to break out the Fry Daddy this weekend.

I enjoyed these, however absurd the concept of pumpkin spice flavored flakes is.

On the down side,they taste nothing like pumpkin. They fall into the same trap as most of these recipes where they give you the spices that make pumpkin pie so great without any of the actual pumpkin flavor. So, there is no rich pumpkin flavor to them. They are just all spice (allspice?). Buy a container of McCormick’s Pumpkin Spice, sprinkle it on Frosted Flakes and you probably would have the same effect.

Would I get them again? Yeah, probably…especially if I am buying some vanilla ice cream. Would I go out of my way for them? Maybe a few aisles or so, but I am never going to run out to the store specifically for them. Will I miss them when everything becomes peppermint or gingerbread flavored? Probably not.