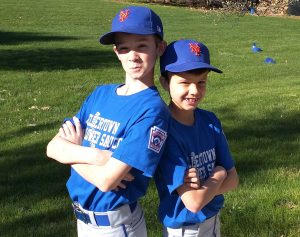 Last night we lost our ninth straight game, this one coming against the previously winless last place team. It all but assures us of a last place finish on the season with just a game to go. Of course, anyone that knows me and my love of sports, knows how much this must bother me, especially as the manager of this team. No one wants to finish in last places and I take it personally.

So, of course, I sulked in the car on our way home and I moped around the house as the kids ate their dinner, finished homework and got ready for bed. It is the same thing I did last week when we lost 15-14 when the other team scored five runs in the bottom of the last inning and it was the same thing I did after nearly every other loss during that stretch. Our one win seems so long ago.

The reasons I feel this way are complicated. My attitude isn’t necessarily about me, but I’ll admit that a bit of my ego is involved. I see the other three teams from our town having a little more success in our combo league (multiple towns involved in a league with 26 teams) and I do turn a little green…I won’t deny it.

However, the bigger driving factor in my feelings after the games is my responsibility to these kids. Their parents have trusted their kids to me and my two coaches to teach them this game and help them become better players. At this age (9-11), the kids involved for the most part want to be there and want to play. Some may have aspirations to play in high school or beyond and some may just enjoy the game and just want to be out there. What ever their reasons for being out there, it is our responsibility as coaches to help them get better.

So, when a kid struggles to get ball in the strike zone, while I try to figure out what they are doing wrong, I am also thinking about whether or not I adequately prepared them for this situation. When a kid picks up the ball on the first baseline with the runner flying past them and becomes unsure of what to do with the ball, the only thing I can think of is how we didn’t cover that situation enough in practice. When a kid strikes out for the third time in a game, all I can think about is how we should have spent more time with the tee in practice. These are things that my coaches and I take very seriously.

However, let me get back to this morning and my revelation. As I sat here sulking, I was reminded of how in one of our games one of the kids gave up two home runs. Not the ball-got-kicked-around-the-outfield type of home runs. We are talking about the-outfielder-takes-two-steps-towards-the-fence-looks-up-and-just-watches-the-ball-go type of home runs. When I went out to check on my pitcher and ask him if he was okay, his face absolutely lit up and he said, “that was cool!”

After another loss, one of the kids came up and started telling me how he had promised his mom that he would score a run for her and she promised him Rita’s if he did. He was so excited because he had managed to get on base and score in the bottom of the last inning.

There was another boy on the team that has struggled with accuracy on his throws all season. Last night, he fielded the ball in left field and fired a strike to get the guy trying to score at home. Later on, he went on to pitch for the first time and had two strong innings.

Most of all, I realized that in all my sulking about the games, Benjamin and Matthew continued to laugh and giggle and smile. In fact, during all our losses, the whole team continued to laugh and joke in the dugout, as well as discuss who had the best play in the game and cheering on their teammates. Even in the realization that we would finish last, Benjamin turned around to me and said something along the lines of, “Well, someone has to finish last…it might as well be us.”

While I believe I put on a good face and was able to stay positive for the rest of my team on the field, it was Benjamin and Matthew that had to see the dark cloud hanging over my head. Even as they tried to cheer me up, I wallowed in it. At the end of the day, all the teaching on the field and showing them how to be good sportsmen, gets washed away when we are off the field by them seeing me sulk. Actions speak louder than words and I probably failed them in that regard.

As I sit here at my desk facing my pending layoff, there is no better time than now to learn from my kids and my baseball team about enjoying life, regardless of what hits me. These are lessons that cannot be overstated.

That’s why I can’t wait to see them tonight. To tell them they were right, I was wrong. As I sit here contemplating these games and the other misfortunes of life, staying positive and having a good attitude is so important. A game is just a game, but that laughter and smiles and attitude regardless of what happens in that game is a key to happiness in life. It’s what you do with losses and misfortunes in both games and in life that means everything and I need to let my boys know that I could not be anymore proud of them for the attitude they showed than if they had hit a championship winning home run.

A few weeks ago, a manger of another team and I were contemplating our woes this season. At that point, between the two of us, we had two wins.  As we were discussing all the little things that go wrong that lead to lost games, he had the following to say, “When we our kids are grown up and we reminisce, these inconveniences won’t be the memories.” It is such a good perspective and I think I’ll always remember that. I also hope that I always remember the year my team went 1-11 or 2-10 and my sons and team taught me a little bit about having the right attitude.